In our culture, there is so much disconnection between ourselves and what we use every day. Just how exactly did your smartphone, or your breakfast cereal, or a thousand other commonplace objects come to be?

I never asked myself that either, but lately, I find myself wondering that a hundred times a day — ever since I learned a little more about the creation of the humble envelope (and how it has been re-envisioned) during a visit to Mohawk’s Saybrook Converting Center. Located just about an hour’s drive away from my house in Beachwood, Ohio, I am happy that this 1,000,000-square-foot facility is quietly thriving in my home state.

After I arrived, I briefly chatted with Mohawk’s CEO and Chairman, Thomas O’Connor, who is the third generation of the O’Connor family to own and operate Mohawk. As such, he is very passionate about the industry — and responsive to changes within it. To address the declining demand for print, he focused on expanding Mohawk’s markets — which included opening Saybrook.

Here paper is converted from massive rolls that are trucked in from Albany, New York, about a 5-hour-drive away, into more manageable sheets. Those rolls are pretty unwieldy — they can weigh anywhere from 700 to 6,000 pounds!

Envelopes are also manufactured here — roughly 2 and half billion this year, up from 500 million in 2013. Mohawk is rightfully proud to have the world’s largest collection of premium envelopes — over 95 million — stocked and ready for immediate shipment. How did this come about? “We’ve bought a lot of equipment and hired a lot of people — 200 in fact — and are still looking to hire over 100 this year,” Tom told me.

“Getting into envelopes was an opportunistic move, no one would ever call us visionary there,” he laughed. “We saw an opportunity when the largest envelope manufacturer went bankrupt, and the second largest bought them. Even if [the envelope business] is declining at 10% a year, we’re starting at 0. We will decide who we want to be. We want to make sure strategically that we will build a profitable commodity.”

Mohawk’s approach is not to make the lowest priced product, but to to make an excellent product at a reasonable price. Doing that starts with the basics, like a clean, organized plant where safety is the first priority — Saybrook in fact just celebrated its 10th anniversary for no lost time or accidents over 2 1/2 million hours of work.

Another priority is raw material recovery, also known as recycling — the two images below show giant bales of shredded and compressed scraps of paper left over from making envelopes. They’ll be trucked back to Mohawk’s New York facilities in Waterford or Albany to make more paper.

Another converting process that occurs at Saybrook is paper embossing — in which a patterned roll and pressure produces a raised pattern on the paper. In the picture below, you can see a paper roll with linen embossing (the most common type) in the spots where the chalk has been rubbed.

And here you can see a roll being embossed:

To become sheets, a roll is essentially unrolled and cut:

And here’s the journey hot pink sheets take as they are sorted, packaged and labelled in preparation for boxing and shipping.

Once paper rolls become paper sheets, they can also be transformed into envelopes. Because the plant is climate controlled without humidity, the envelope blanks remain flat, not curled, for the highest quality final product.

Here you can see a pile of A7 envelopes — not yet folded and gummed — for a Minted.com order.

So, how do envelopes get gummed? Excellent question! That bottle and tray holds the gum individually applied to each envelope.

Mohawk has the capability to manufacture any type of envelope — commercial, baronial (with a  pointed flap), side seam, announcement, square flap, booklet, square and catalog. They can be also be lined, or customized with windows in any size, from any Mohawk paper.

Because anyone can use Mohawk paper to manufacture an envelope, Mohawk wanted to set theirs apart — and their Director of Envelope Operations Vincent Giannetti came up with a distinctive, clever and subtle way to do so — the “m” notch on the left-hand seam that you can see below.

After this visit, I can honestly say I’ll never look at an envelope the same way again! So now, in addition to turning stationery over to see its designer or to check out the bruise left by letterpress or engraving, you can be sure I’ll be holding up envelopes up to the light in search of the mystical Mohawk M! 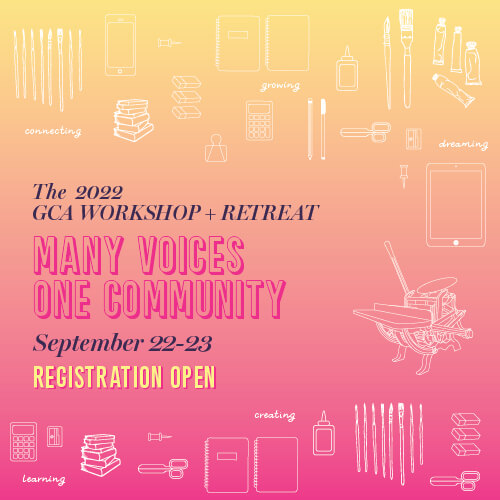 GCA TikTok-er of the Week: Kiss and Punch